In the late 1800s, Nebraska’s population soared. I know that’s hard to envision. “Nebraska” and “population explosion” seem unlikely bedfellows, but these newcomers were people who ventured west on horseback and in covered wagons. They couldn’t envision cars or planes, much less Google Earth to show them better real estate. Either Nebraska looked good enough, or they just got tired of heading west and stopped. 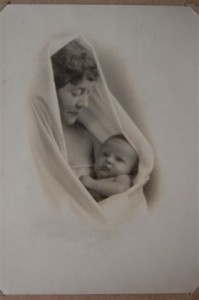 My great-grandparents were among the throng. They were Swiss immigrants, and my best guess is they found a German-speaking community — and in the nick of time. My grandmother Rosa was born soon after they settled. Like her parents, her first language was German. She was by heritage 100% Swiss, and by birth 100% American.

Seven decades later, my dad, half Swiss according to my math, decided to take his mom back to her ancestral home. Her parents had come from Engi, Switzerland, a tiny village in the mountains. My grandmother’s family had been one of the first three families to settle Engi and thus had been part of the church registry. Births and baptisms and marriages and deaths were all recorded by my grandmother’s ancestral church in the registry going back to 1511, when the village was settled. Centuries of the sacramental records were meticulously handwritten for the Blumer clan; page after page were found in the church registry. In 1511, there were no Catholic cemeteries in Switzerland. There were only cemeteries. Then, everyone was Catholic, so using the words Catholic and cemetery together was redundant.

My dad, an avid photographer, recorded this adventure in detail. We have pictures of my grandmother surrounded by a gaggle of young schoolchildren, all Blumers, all related to my grandmother who grew up a continent away. And in the photo array are pictures of the cemetery, headstones of the Blumer clan, the same Blumers meticulously noted in the church registry — centuries of Blumers. These were the brothers and sisters, aunts and uncles, and parents and grandparents that Rosa’s parents had left behind. They were the family she’d never met, but family who had informed her life nonetheless. Engi’s cemetery was sacred ground for her. Based on my dad’s photo record, my grandmother meandered through in the cemetery reading worn headstones, wandering row to row.

Soon after she returned, my grandmother mentioned to me that she wanted to be buried in San Diego. My grandmother and grandfather lived for decades in southern California, in a house that had a marvelously terraced garden with citrus trees, plums, avocados and peaches. This was her home, not the sod hut of her birth on the Great Plains or the mountainous terrain of Switzerland. More significantly, her husband, youngest son and grandson were already buried in southern California — her holy ground.

Having lived a farm-to-table organic existence decades before it was fashionable, my grandmother lived to 103. She died thirty years after she first mentioned her wish to be buried in southern California. We took her home to San Diego and buried her between her husband and her youngest son.

As we stood at her grave, I had a profound awareness that this was my dad’s holy ground. His entire family was buried here — both of his parents, his only sibling, and a nephew.

For good and for bad, our families have launched us to where we are. We stand on their shoulders.

For good and for bad, our families have launched us to where we are. We stand on their shoulders. And in the ideal, there should be a place, or places, where each of us and those who come after us can stand on sacred ground, pause, and reflect.

there should be a place where we can stand on sacred ground, pause, and reflect

Reprinted courtesy of The Catholic Cemeteries of the Archdiocese of Saint Paul and Minneapolis. Published in the fall 2015 issue of Heritage.